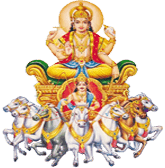 Famous Sungod Temple in the World

According to temple sources, the rays fall on the Dhwajasthambam through the Gopuram of the temple and directly touch the feet of God. “The rays that fall on the foot, naval and head of the statue, look beautiful at that time”.

The temple is built in such a way that the early morning rays of the sun fall on the feet of the deity twice a year, in March and in October, even when the 5 entrance gates are closed.

The devotees believe that people who worship Sun god get health, wealth and happiness. That is why the village is also called ‘Harshavalli'.

The idol depicts the Sun God on a chariot. The image, made of black granite, flanked by Usha and Chhaya, is 5 feet tall. Padmapani is the name of this deity – Padma stands for wisdom and Usha and Chhaya represent eternity. The head is crowned by the serpent Adisesha.

Maha Soura Yagam in the month of December 2013

The yagam is being performed with the objective of purifying the minds and ensuring wellbeing of one and all.

Posted by Unknown at Thursday, February 07, 2013 No comments: